Harry Pearson on his favourite cricketing canines, including Rodney Marsh as you’ve never known him before.

People will speak in wonder of the outfielding of Derek Randall, Jonty Rhodes or perhaps even of Colin Bland, but by far the greatest cover I ever saw was a short, stocky, grey-bearded fellow from County Durham. He rejoiced under the unlikely name of Charlemagne Commondale, but was known to teammates simply as Ingo.

Ingo was so swift across the ground he could be entrusted with patrolling the entire off side between point and mid off. His lack of height helped him to scoop up even the most firmly struck drive, while his gravity-defying leaps into the air saw him pull off many an outrageous catch. No batsman dared chance a second run to Commondale; his return – always to the bowler’s end – was swift and deadly accurate largely because he eschewed throwing the ball in favour of sprinting to the stumps with it full tilt. He had the stamina to keep going all day long, his concentration never wavered. Despite the fact that he couldn’t bowl and had not the faintest idea even how to hold a bat, he was considered by one and all to be worth a place in any side for his fielding alone.

I had known Ingo since he was a nipper and took a proud paternal attitude to him. It would be nice to think that his brilliance as an outfielder was somehow picked up from me. Yet while it is true I had helped hone his skills by throwing a powerball against an uneven sandstone wall for him to catch for hours on end during long summer evenings, the fact was that his talents – the judgment of angles and distances, the speed across the ground, the unwavering focus and unquenchable stamina – were purely genetic. His ancestors, originally from the hills of Southern Germany, had for centuries plied their trade as livestock herders and rat-catchers. It was in his blood. Ingo, you see, was a Standard Schnauzer. He was by far the greatest cricketing dog I have ever played alongside. And there have been many. Indeed, during days out with friends on the Northumberland coast in the early years of parenthood we could often field an entire XI of them.

Ingo’s oldest friend, Stanley, a cavalier King Charles Spaniel, was a patrician feature of our team. Like a blue-blooded amateur of the Edwardian era, Stanley refused to run or jump. Instead he stood at first slip, a position from which he surveyed proceedings with the barely disguised aristocratic disgust of one who should rightfully have been sitting in the lap of a perfumed courtesan in a luxurious carriage trotting through the streets of a bustling city rather than standing in the lashing wind on a northern beach. Whenever the ball came near him, Stanley flinched, not I think from fear, but from revulsion at its vulgarity. Stanley did not bring much to the team playing-wise, but he certainly added tone. 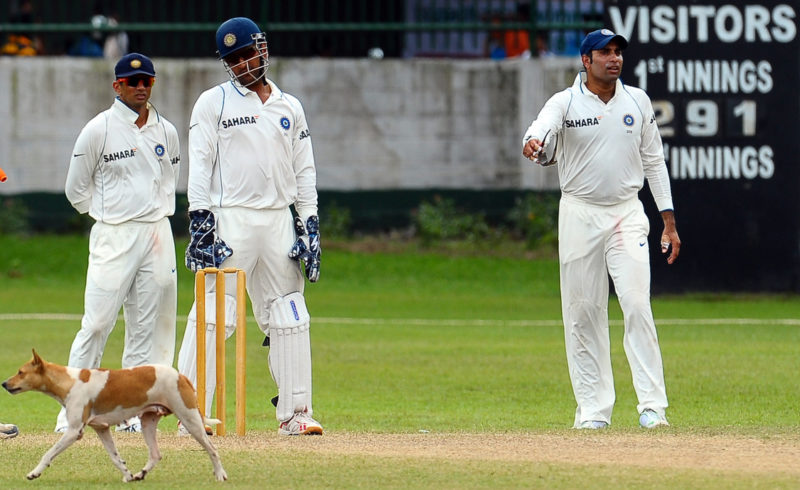 Indian legends during a practice match against Sri Lanka in 2010

A Border Collie named Jess was another regular in our starting line-up. Jess was quick and active, yet essentially useless, except when the pre-school members of the fielding side decided that standing around waiting for the ball was totally boring and it would be far more fun to discover what getting washed out to sea felt like. At which point Jess would plunge into the waves after them and drive them back to the shore, barking and occasionally snapping at their ankles – how Trevor Bayliss could have used Jess in Australia this winter.

My first cricketing dog was a West Highland Terrier who came from Berwick Hills on Teesside. He had short legs, several missing teeth and a minatory attitude that often ended in violence. He answered to Doogie, but his character and his preferred position of wicket-keeper led my friends and I to nickname him Rodney in honour of the great Australian stumper. It should be said, however, that though they shared many traits, Rodney Marsh never bit my father’s thumb when he tried to take away the ham bone he was chewing under our dining-room table. Although I don’t doubt that he would have done had the situation arisen.

Though they shared many traits, Rodney Marsh never bit my father’s thumb

Doogie’s position behind the stumps was less to do with his talents than because it afforded him a good view out of the garden gate, the better for yapping at postmen, door-to-door salespeople and anyone else who threatened to violate his personal space. Occasionally a delivery would beat the bat and rebound back onto the stumps off his rump, allowing us to mark the wicket down as a stumping.

In an attempt to interest Doogie more in the game I once experimented by rubbing the ball with a beef-stock cube. It worked, rather too well. Prising the meaty cherry from his grasp was like trying to get Dennis Lillee to relinquish the ball when he was on a hat-trick against England at the WACA. Although to be fair I expect even DK would have stopped short of burying the ball under a rose bush and snarling if Ian Chappell went within a yard of it. 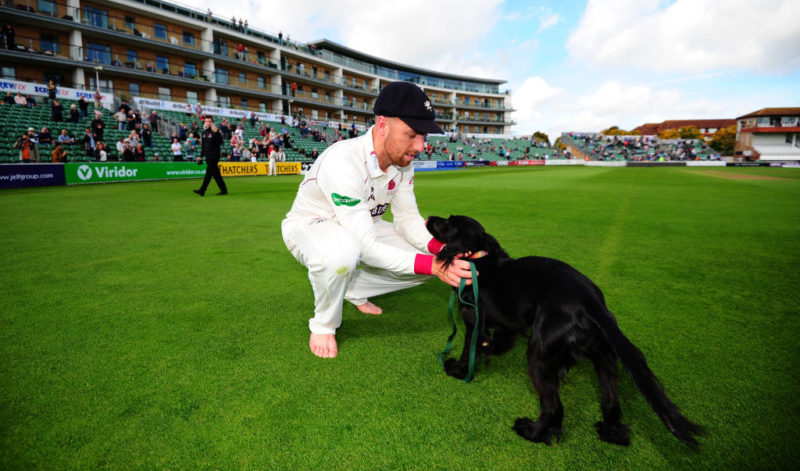 My auntie Bertha’s dog Rascal also made a contribution to our games in the garden, though mainly by peeing on a length just outside off stump and then scuffing it up with his powerful back legs, after the style of fellow Yorkshireman Bobby Peel. More than once the umpires warned him about his behaviour, but since he was a Jack Russell Terrier he took even less notice of them than Peel himself would have done. Local knowledge dictated that the minute Rascal appeared it was time to bring on the spinner.

There were others too: Fred the psychotic Lakeland Terrier who refused to wait until victory was sealed before grabbing a stump and running off with it; Bungle the Basset Hound who prevented dozens of boundaries one afternoon simply by lying down and falling asleep at midwicket; Misky the golden Labrador who contributed little to the cricket but could be relied on at the close to howl along semi-melodically to a harmonica rendition of Booker T and the MG’s “Soul Limbo”.

When it came to actually playing the game, though, none of them could match Ingo. What a fieldsman he was. Any captain would have wanted him in their side. Indeed, had it not been for an unfortunate habit of attempting to have sex with spectators during play he would certainly have been a multi-million-dollar signing for an IPL franchise. And yes, I know what you’re thinking, but I reckon we should leave Shane Warne out of this.

This article first appeared in The Nightwatchman, the Wisden Cricket Quarterly